« back to articles
published on October 27, 2009 by Antonin Hildebrand
REBUG - Record the bug and replay it later

What if you could travel back in time?

I want to share with you an idea for a new tool I've had during my work for Transpond. In a nutshell, Transpond is building web-based tool for making Facebook applications. Sound exciting?

Have you developed anything for Facebook before? A Facebook application is a piece of code living on your own server but heavily talking to Facebook APIs. And Facebook is unfortunately something you cannot take home and run it on your own local server for debugging purposes. You need to develop and debug your application against the live site (or the sandbox they provide).

And here is the problem. There is a class of bugs caused by Facebook (i.e. they break something during updates) and a class caused by specific data (e.g. encoding problems because a user entered text with diacritics). These bugs are tricky to reproduce. The first type is reported by QA but gets fixed before the developer sees it. The second type is hard because the developer may be not able to reproduce exactly the same state (for example a newsfeed causing the bug is already replaced with newer content which is not exposing the bug, or the developer is logged in under different account than QA tester).

Many times these bugs are really trivial. I can look at the Net panel in Firebug or javascript console and the cause is obvious. But this information is not available when reading a bugreport in Bugzilla. Sometimes I would a give fortune for a link moving me back in time and in front of the browser with the bug exposed...

What real-world problem does it solve?

The technology of macro recorders was already developed by extensions like iMacros or Selenium. I've also made one attempt for XRefresh extension in the past (a very challenging problem). 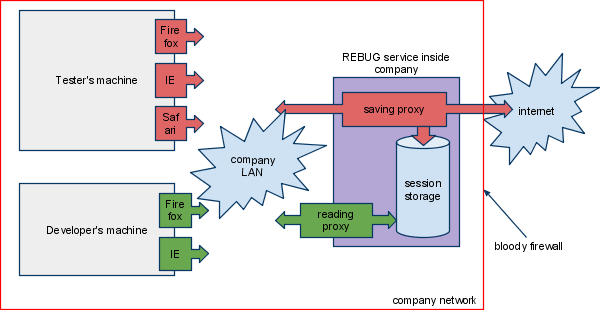 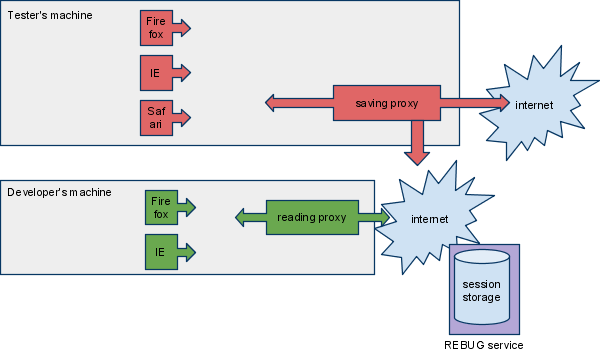 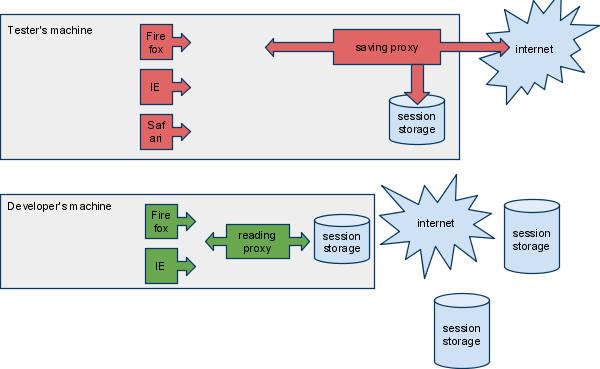 External browser inputs should be simulated as closely as possible (browser version, platform, date/time, screen size?, etc.) and the developer should be unobtrusively notified about differences between his setup and the user's setup - but it is not expected the developer will have exactly the same setup as testing user (for example developer has the Firebug extension which may not be the case of tester).

REBUG can be used as a mockup server for automated testing infrastructure. Browser sessions can be generated synthetically and consumed by defined test suites. Recording and hand-making approaches can be mixed. Thanks to storage being a git repo, it can be edited independently on the saving proxy. Reading proxy then can be used by automated tests runner.