« back to articles
published on August 17, 2010 by Antonin Hildebrand
TotalFinder summer update

** Hey, TotalFinder 0.9.8 is out. Unfortunately nothing much new. Just fighting fires. **

0.9.5 and 0.9.6 were pretty bad releases. There was a bug introduced by new localization code. Both versions started crashing immediately after expiration. Unfortunately this rendered the auto-update mechanism defunct.

The one-day-old 0.9.7 is also bad. Some people experienced crashes when manipulating tabs or closing windows. I believe I nailed the problems in 0.9.8.

Thank you all who sent me crash reports. Unfortunately I wasn’t able to respond to all of them.

I’ve added small a reminder that this software will become paid software soon. I’m pretty sure you know this already. But over the internets I saw some discussions of people who don’t read or who expect to stick with an alpha forever. So I wanted to make it clear this way. You can dismiss that small gray sticker in the top-right corner by clicking on it. I quite like this solution. This may be my future way how to communicate important things to all TotalFinder users. 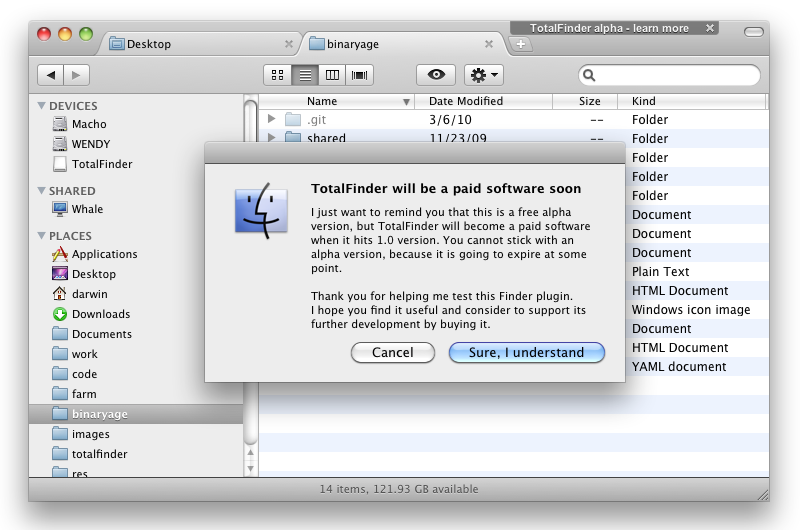 That crashing lesson was a terrible experience and I want to prevent something like it in the future. I decided to run the same code path after expiration. This way I don’t need to test the expiration state intensively prior to every release.

To force people to upgrade I’ve added a little annoyance. Every 10 tab switches a dialog pops up which reminds you that you should update to the latest version. 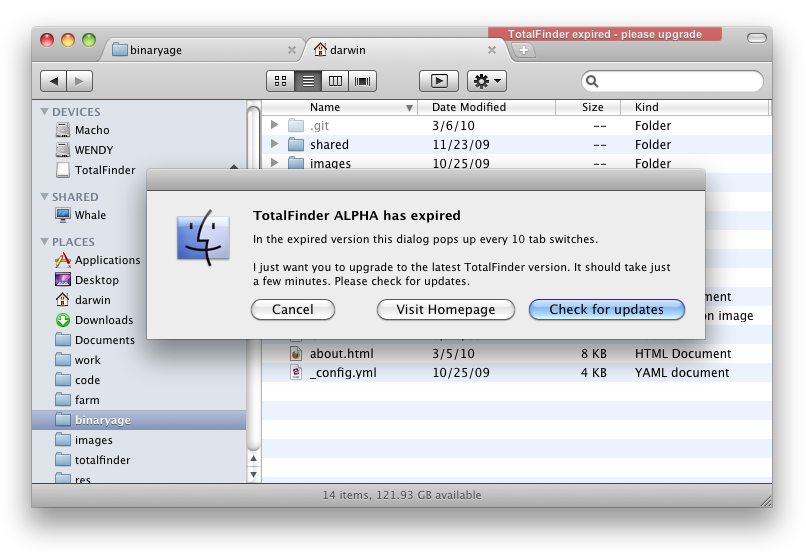 Spent some time on mastering XCode4

I was so excited about XCode4 that I’ve converted TotalFinder projects and used it for development. This slowed me down quite a bit, because it is still buggy alpha software with many flaws. It also has a completely new UI to learn. But I couldn’t help myself. I need to live dangerously on the bleeding edge. I think you guys who are using TotalFinder since the early versions know exactly what I mean :-)